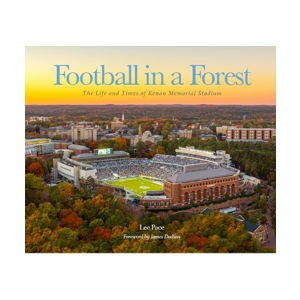 "Football in a Forest: The Life and Times of Kenan Memorial Stadium" Book

This 240-page oversized book features half text and half photos/memorabilia celebrating the 89-year existence of Kenan Memorial Stadium.

Football in a Forest - The Life and Times of Kenan Memorial Stadium was conceived, authored, edited and published by Chapel Hill writer and broadcaster Lee Pace, a 1979 University of North Carolina graduate with long ties to the Tar Heel football program.

Pace tells the chronological story of the stadium from its inception in the mid-1920s and opening in 1927 through modern times. He recruited writers from Sports Illustrated and the New York Times best-seller lists to contribute essays on their experiences in Kenan including James Dodson, Tony Barnhart, Larry Keith and novelist Jill McCorkle and the book is richly illustrated with vintage photographs, antique game programs and ticket stubs and dramatic images capturing the excitement of the Tar Heels 11-3 and ACC Coast Division championship season in 2015.

Most notable among the images are a series of shots taken by Boone photographer Jordan Nelson from a drone circling the stadium at twilight and dusk during Carolina's home season finale in November 2015 against Miami.

Football in a Forest Pr..